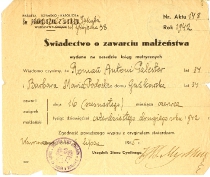 The outbreak of WWII put a stop to Palester's extremely promising career. The destabilised life in the occupied Warsaw forced him, and other artists, to take various jobs to earn a living. The orders issued in 1940 by the occupying authorities in the General Government banning concerts, operas and serious events, especially with national overtones, were designed to replace Polish cultural life with primitive entertainment. In this situation music-making was transferred to churches, private homes and cafés open to Poles, though in each case the musical programme presented there had to be approved by the German authorities. Despite that, café concerts were of high artistic quality and featured distinguished artists. The Warsaw intelligentsia was attracted in particular by: "Art Salon" in Nowy Świat Street, run by Bolesław Woytowicz, and "Art and Fashion" at 11 Królewska Street, where Witold Lutosławski and Andrzej Panufnik used to play. Initially, Palester performed in the "Gastronomia" restaurant at the corner of Nowy Świat and Aleje Jerozolimskie Streets. However, as early as 8 May 1940 he was arrested during a round-up and sent to the Pawiak prison. After over six weeks he was freed from the Gestapo thanks to the help of his friends. However, he was soon warned by Zbigniew Drzewiecki that during an interrogation the Gestapo asked him about Polish musicians, especially about members of the board of the Polish section of the International Society for Contemporary Music. To avoid re-arrest, in the autumn of 1940 Palester left Warsaw and went to Jędrzejów where he found refuge with the Przypkowski family. He returned then to composing. It was in Jędrzejów that he completed his Violin Concerto, began in the winter of 1939, and composed the Symphony no. 2. Palester’s chamber works, such as Second Violin Quartet, Sonata for 2 violins and piano and the Piano Sonatina for four hands were performed in music cafés and during clandestine concerts at private homes.

The establishment of the underground Government Delegation for Poland (an agency of the Polish Government-in-Exile in London) was quickly followed by the formation of clandestine organisational structures that were to protect cultural heritage and maintain various forms of artistic activity. This was overseen by the Information and Propaganda Bureau (BIP), subordinated to the Union of Armed Struggle (Home Army from 1942). The Cultural Propaganda Section included the Musical Department which enlisted the cooperation of composers who were in Warsaw at that time. Through BIP artists and intellectuals also received financial assistance and with time commissions for various works. Some of them were even published in London by means of the photo-offset technique, for security reasons under pseudonyms. This is how Palester's Sonata for 2 violins and piano was published under the pseudonym "Modrzew" ("Larch") along with Quintet by Constantin Régamey ("Klon" – "Maple"), Second Quartet by Roman Padlewski ("Kasztan" – "Chestnut") and choral pieces (Harvest Prelude and Fugue and Wycinanki) by Stanisław Wiechowicz ("Jawor" – "Sycamore").

On 16 June 1942 Palester married Barbara Gużkowska-Podoska after the annulment of her first marriage. The Palesters spent the subsequent occupation years with Barbara’s distant relatives at the Żerosławice manor in the Cracow region. It was then that the composer finished his Third String Quartet, which he began in Warsaw, and Polonaises by Michał Kleofas Ogiński for chamber orchestra. He also began to compose an opera based on Wacław Berent’s novel The Live Stones, which remained incomplete, and prepared incidental music to Stanisław Wyspiański’s Acropolis. The manuscript score for this great mystery play planned by Leon Schiller for the inauguration of the first post-war season at Teatr Polski has not survived either. The Palesters stayed in Żerosławice also during the Warsaw Uprising. Yet the manor ceased to be a safe refuge. In November 1944 the manor in Żerosławice was burnt down during the pacification of the village and its inhabitants were arrested by the Germans. Having been released, the Palesters went to Cracow and then to Zakopane. Shortly before the entrance of the Soviet troops the composer was once again arrested by the Gestapo in Jaszczurówka. During the war Palester lost his loved ones: father and stepbrother Krzysztof, who was killed in the Warsaw Uprising. The Palesters’ Warsaw apartment was burnt down and the manuscripts of many of his works were lost.